Thoughts on the 2016 Presidential election

Thomas Friedman and Richard Painter suggested in their columns today that Trump may not believe much of what he said while campaigning.  That seems plausible, and may give some people hope.
Even so, the 60 million people who voted for Trump yesterday said a big “fuck you” to women and minority communities including Latinos, African-Americans, LGBT folks, recent non-European immigrants, Jews, and Muslims. They also rejected the consensus of informed (“elite”) opinion (Republicans and Democrats) that Trump was unfit for the office of President.
What is likely to happen when all three branches of government are controlled by the Republican Party?
Congress


·       Repeal of Affordable Care Act and a return to laissez-faire health insurance provided primarily by employers;


·       Reintroduction of bills to privatize Medicare (and perhaps Social Security);


·       No progress on legislation to inhibit climate change;


·       Continued inaction on proliferation of firearms with high-capacity magazines.
Posted by John at 1:35 PM No comments:

Notes on the Insurance Act 2015

The Insurance Act 2015 has passed both Houses of Parliament and is expected to become law in the UK in March 2015.

Part 1 sets out a few definitions.

Part 3 abolishes the rule that a breach of warranty in a contract of insurance results in the discharge of the insurer's liability, and sets out what the consequences of a breach of a warranty will be henceforth. It also makes express changes to ss. 33 and 34 of the Marine Insurance Act of 1906.

Part 5 abolishes the rule permitting a party to avoid a contract of insurance on the ground that the utmost good faith has not been observed by the other party, and modifies the rule (to the extent required by this Act and the 2012 consumer legislation) that a contract of insurance is a contract based on the utmost good faith. It also invalidates any contractual term that would put an insured in a worse position with respect to representations than it would be under this Act.

Part 6 amends the Third Parties (Rights Against Insurers) Act 2010 by making the changes to it that were thought necessary or advisable before the law came into force.

There are explanatory notes provided by the UK Treasury that explain the Act in greater detail.

For further reading on the law as it was, see Thomas J. Schoenbaum, The Duty of Utmost Good Faith in Marine Insurance Law: A Comparative Analysis of American and English Law, 29 J.Mar.L.Com. 1 (1998).

Proposed changes to the Marine Insurance Act of 1906?

What happens to uberrimae fidei in the United States when the UK Parliament amends the Marine Insurance Act of 1906?


According to Business Insurance, Insurance Bill, HL2014-15, was introduced in the House of Lords, the U.K. Parliament's upper chamber, in late July 2014. It is expected by the Law Commission and industry experts to receive royal assent — by which Queen Elizabeth II signs it into law — by March 2015 and go into effect soon thereafter. The bill would reform measures contained in the Marine Insurance Act 1906 that applies to commercial insurance contracts written in the United Kingdom. The legislation would change current practices that include insurers being able to avoid paying claims if any part of an insurance submission contains a misrepresentation — even if that information is not pertinent to the claim.

In February 2015, the House of Commons unanimously passed the Insurance Bill that will update the Marine Insurance Act 1906.

In the United States, the rule has no statutory foundation. It is instead based on two centuries of case law. Congress could amend the federal maritime law; however, there has never been much enthusiasm in Congress for changes to the maritime law that were not backed by the entire marine industry.
Posted by John at 11:36 AM No comments:

Chelsea Gardens in the spring 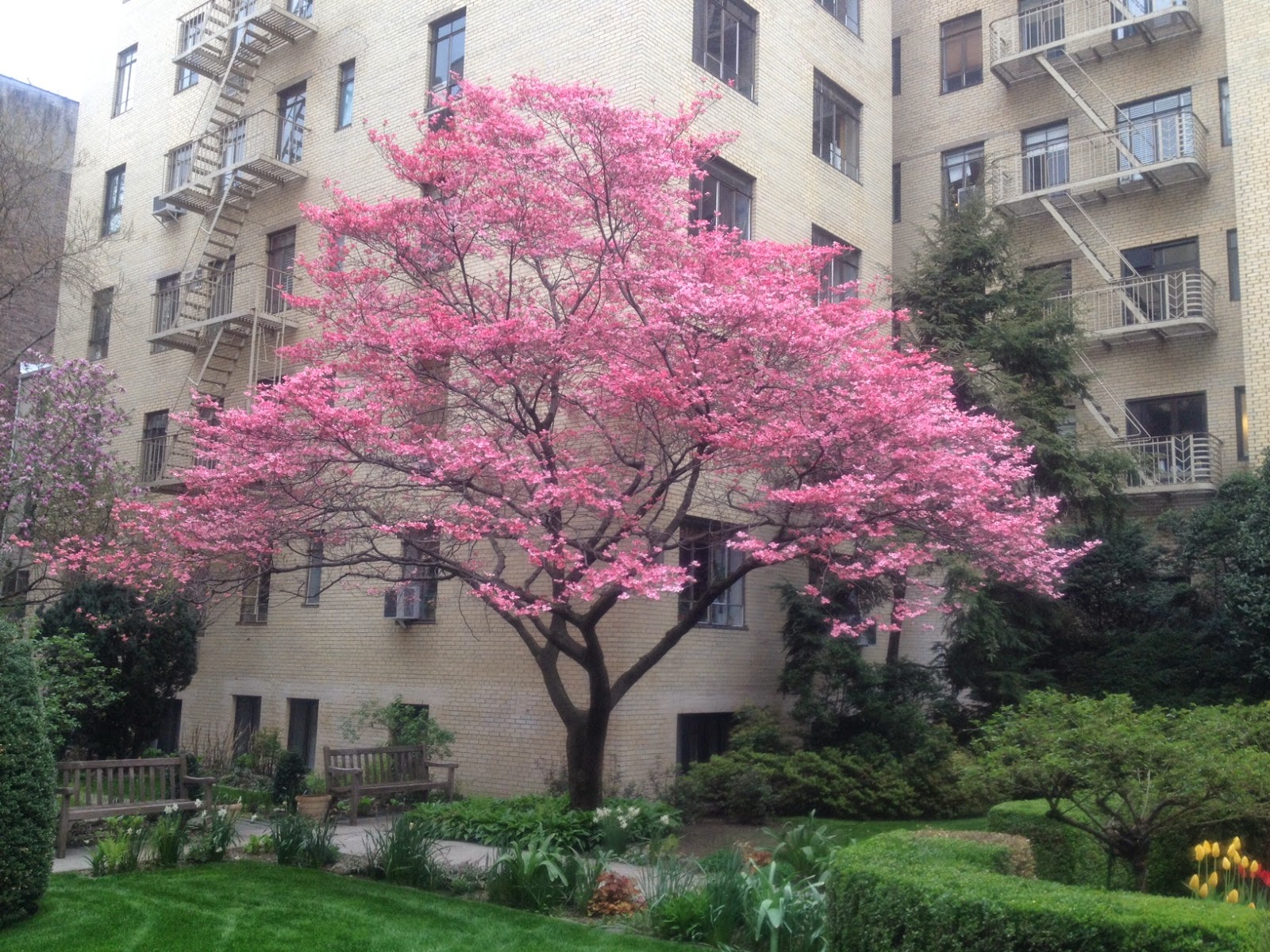 Assessing damages for injury to a pet

Last Thursday, I was sitting as an arbitrator in the Small Claims Court in Brooklyn.
Ms. Petrova had sued Mr. Domenico because his dog (she said pit bull; he said terrier) had savaged her schnauzer, which she claimed was a service dog (she had no visible infirmities but said she had MS).  There didn't seem to be any argument about liability. The photographs showing the injuries were gruesome. The dog was not leashed or tied, and somehow got out of his yard. Mr. Domenico did not dispute that the dog had previously injured another dog, and been the subject of a Daily News article.
On the day of the incident, Mr. Domenico went to the animal hospital and paid $3400 as a deposit against the final bill. He was advised that the total bill would be within a range from $6300-$8400. The final bill was $6300, even though the separately enumerated charges exceeded that sum, but Mr. Domenico had stopped returning Ms. Petrova's phone calls by that point, so Ms. Petrova had to use her credit card to pay the balance of $2900.
Ms. Petrova sued Mr. Domenico for about $5000, the limit in the Small Claims Court. She showed me the receipt for $2900, and said she had extra expenses for travelling to the animal hospital, medication for the dog, and other things. She had no receipts for those expenses.
For his part, Mr. Domenico had not seen the final bill, had been told the dog had tumors, and was not going to pay for any care the dog would have needed regardless of the mauling.
Without a lot of time to spend on the case, I awarded Ms. Petrova $2900.
Thinking about it afterwards, it occurred to me that plaintiff could have argued that she was in the zone of danger and was entitled to compensation for her emotional distress. She might even have argued that the dog was entitled to compensation. It also occurred to me that defendant could have argued that it was wasteful to spend $6300 for surgery on an old dog, when plaintiff could have purchased a new dog for less money.
On reflection, it seems that we are probably unwilling to accept either argument. We treat dogs as more than property, so the defense argument that works for old cars doesn't work for dogs. However, we treat dogs as less than people, so we don't award damages for their pain and suffering. We might award damages for emotional distress, but I need to research that...
Posted by John at 12:27 PM No comments:

The Appellate Division, First Department, cited two of my cases in a recent opinion, Cruz v. New York City Housing Authority, 2012 NY Slip Op 01505 (Feb. 28, 2012). They were elevator cases in which the defendants were granted summary judgment and the plaintiffs were denied leave to appeal.
That makes me proud and sad at the same time. It means that after ten years in the business of insurance defense, I actually have a body of work worth citing. That’s not bad for a third career, but it also means that I’ve been away from marine insurance for a long time.
Posted by John at 6:43 PM No comments:

BusinessInsurance.com reported on June 30 that General Re had been fined for violating trade sanctions against Iran as a result of its participation in Steamship Mutual's excess coverage from 1998-2001. In 2005, General Re paid its share of two claims incurred by National Iranian Tanker Co. totalling $310,000. The fine was said to be $59,130, and OFAC announced that "the transactions do not constitute an egregious case." You can read the press release at http://www.treasury.gov/resource-center/sanctions/CivPen/Documents/06292011.pdf.


General Re reportedly turned itself in to the Office of Foreign Assets Control ("OFAC"), blamed the violations on "certain claims personnel", installed "enhanced sanctions compliance software", and implemented training programs for their claims people.  Blaming the claims people seems unfair. Cliff Burns, who writes Export law Blog, points out that "OFAC guidance to the insurance industry makes clear that the issuance of the reinsurance to Steamship for its NITC policy would itself have violated OFAC rules without regard to whether any claims were actually made or paid to Steamship." However, the statute of limitations had run on the issuance of the policy itself.


I was working in P&I when that contract was written in 1998, and I remember how hard it was to get people to take sanctions seriously back then.  The world has certainly changed. Steamship Mutual declined to renew the Iranian fleet this year, and no other Group Club would pick them up.
Posted by John at 10:11 AM No comments: